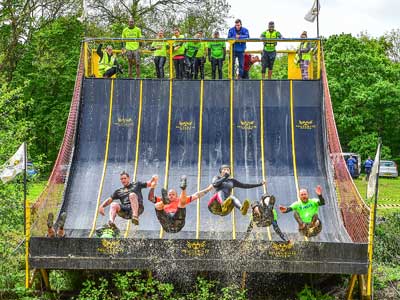 TOP NOTCH, WELL DESIGNED AND BEAUTIFUL
ANDY DOES NUCLEAR FOR THE FIRST TIME

I hadn’t been avoiding Nuclear Races, I had just always been elsewhere when they’d been happening! I obviously had heard a lot about them, they are always winning Mudstacle awards, they pull out some epic looking obstacles and everyone I know raves on about the event!So it was time to put on my big boy pants, set the alarm for stupid o’clock, and mosey on down to Essex to see what one of the biggest names in UK obstacle racing has to offer.

It was a miserable rainy day but this didn’t dampen the spirits. The event village was alive with action, with marshals building huge fires, stalls selling merchandise, the ubiquitous medal engraving couple, food and coffee stalls too. There were also a couple of large shelters to keep people out of the rain. I mingled and caught up with loads of familiar faces which was so much fun. I was running in the final wave at 11:40, as I was helping film the front runners first.

The rain had slowed by the time my wave was starting, but the air was cold and damp, so I was glad for my neoprene layers as we ran off from the countdown straight into a couple of muddy ditches. It soon became very clear that this was going to be a tough day at the office. Obstacles were coming thick and fast. With 120 obstacles in 12 kilometres you don’t need to be a genius to work out that’s an average of 1 obstacle every 90 metres.

Nuclear put on a great course, using the natural features, such as streams, and woodland to great effect, and also build some monstrous obstacles too. The three showstoppers for me were the Deathslide, Zipwire and the Spinning Monkeys.

The Zipwires. This is epic, EVERYONE loves a zipwire! EVERYONE! This is just so much fun in the middle of the race! This is why I love obstacle races. You get to do unusual and exciting things in the middle of fields and woods. I was half expecting queues at this obstacle due to everyone having to be shown how to clip on to the line and the intimidating nature of the obstacle. But if flowed amazingly well. I was clipped in a sent on my way with a cheeky ‘I hope that’s not the broken one’ from the marshall!

In the last half of the course comes the Deathslide. This is the only part of the course that involves a full body submerge into water so it was both dreaded and appealing in equal parts. Luckily I had no time to think about fears and faceplants, and just climbed to the top watched Andy and Katy go first with an impressive synchronised mid air gun show. BOOM! I sat down, held tight to my GoPro and clenched my butt cheeks! All ideas of pulling off a gun show pose went out the window as I flapped and floundered like a fish out of water. I did have a slight moment of ‘Wow, you’re in the air for a really long amount of time’. This was caught short by the sudden impact of the cold water.

This is where Nuclear step up, take the Oscar, the Golden Globe, the Mercury prize and even a Pulitzor. It’s mid november, and you’ve just been dunked in cold water, they get you out super quick, run past a HUGE warming bonfire, and get you straight onto the next carrying obstacles which gets you whole body pumping with warm blood. Then you’re offered a hot orange squash. A HOT ORANGE SQUASH. I’ve drank beers from all around the world, single malts from every corner of Scotland, but a HOT ORANGE SQUASH after the Deathslide is the most incredible drink in the world!

The spinning monkeys are such a beautiful obstacle to behold. Big, challenging and crazy. As much as I like obstacles that are simply fun and easy, I do love an obstacle that provides a challenge too. The challenge of the spinning monkeys is great, requiring grip strength and a good amount of co-ordination. They had set the spinning monkeys low to the ground so that there was no risk of injury if (when) you fell, and you could slightly cheat and put a foot down if required.

Nuclear certainly lives up to all the hype, everything is done well, and there are hidden extras all over the place, from no extra charges for the carpark or bag drops, to hot showers at the finish line. This is incredibly professional and well ran, the course is top notch, well designed and beautiful. Bravo Nuclear, BRAVO!